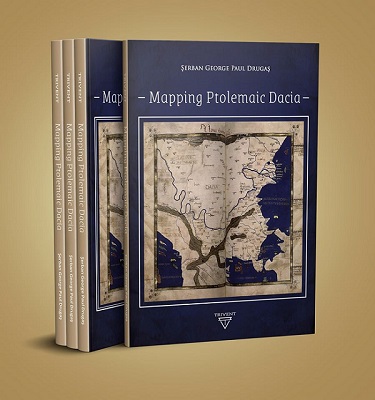 You are invited to purchase and read the new book written by one our members, Serban Paul George Drugas, and published by Trivent. The book entitled Mapping Ptolemaic Dacia is a contribution to the decipherment of Ptolemy’s universal map, with focus on the territory known as Dacia. The information provided by Ptolemy was translated into modern data considering local features and complying with certain general principles. The difficulty of this task consisted in the way the ancient manuscripts transmitted the original location coordinates, as well as in the way Ptolemy patched together information from ancient itineraries and other sources.

The author of this volume conceived a general formula for mapping Dacia based on the information found in the two oldest sources he used. Furthermore, he determined local patterns with the help of the other sources – therefore, defining locations resulted in a better determination of the surrounding relative positions. This information, as well as the correlation of the Ptolemaic locations with archaeological findings, provides an increased recognition of Ptolemaic Dacia, while also contributing to exposing the Ptolemaic universal map.

The book is available for pre-orders here (read some parts of the volume in open access).